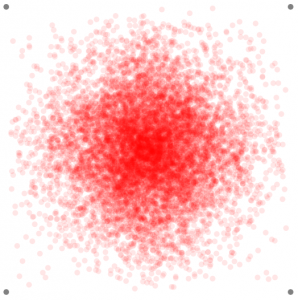 Many different approaches exist for visualizing points in high-dimensional space, including techniques such as multi-dimensional scaling and principal component analysis. Another popular option is parallel coordinates, but radviz is relatively less known. Although there are concerns about the fact that different points in multi-dimensional space can appear at the same position in the radviz visualization, it does have its uses. In the radviz approach, each dimension is represented as a point on a circle. The actual datapoints are then laid out within that circle such that the value in a particular dimension corresponds to the strength of an attraction force to the dimension-point on the circle.

Below is is the code for placing points in 4-dimensional space in radviz. Dimension anchors are in the four corners of a square, but just image them lying on a circle :-)

A radviz representation of the Fisher’s Iris dataset: 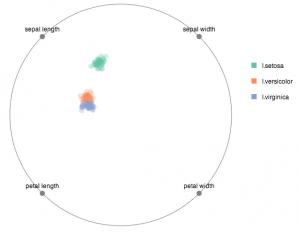