I (Ryo) spent the entire Sunday in the VAST Challenge workshop. We had a poster and received the VAST Challenge Choice Award in the Open Source category. Just before the noon, we also had a twenty minutes presentation and the slides are available from here.

This year there were 79 submissions (break-down per challenge shown below) this year.

Here are some notes on the “grand truth”. I think some of the patterns are very obscure, and they require a lot of imaginations from the analysis to come up with these stories.

We were able to detect most of the strong signals but perhaps most challenging thing about VAST challenges is to infer stories out of these patterns/correlations/relationships. For example, to identify the prime suspect, we would have had to look at his movement one after another and make inference out of his behaviour and “hatred” against Scott Jones. Without no means to validate hunches, it is very challenging to infer any useful insights with confidence.

Symposium on Visualization in Data Science

VDS is a new symposium bringing practitioners and researchers in data science and visualization together to discuss common interests, talk about practical issues and identify open research problems. Two talks that stuck to me were by Torsten Moller and Jeff Heer. Torsten discussed that we use 3 types of modelings to understand the “real world”: computational, statistical and empirical modeling. One of the key challenges in Data Science/Visualization is to make data modeling more accessible.

As always, Jeff Heer gave a very interesting talk. In his talk, he quoted Tufte, “show data variation, not design variation.” His presentation revolved around the question of how our tool might spur new question and prompt skepticism. He argues that visualization design is a combinatorial design space with three components: variable selection, data transformation, and visual encoding design. Some of the ongoing challenges are 1) refining visualization recommendation (What to optimize? How to evaluate?) 2) Scaling interactive visualizations( Large D is harder than large N) 3) Help avoid statistical pitfalls (recognize mix effects, convey uncertainty).

This work by Stef and his colleagues was beautifully presented, and I was very impressed that Stef live demo-ed his tool. The idea is very straightforward. You make a graph of dynamic graphs. As the size / complexity (dynamic) of graph increases, another abstraction layer of the graph can help understand the data better. In this case, he was able to visualize different states of graph dynamics. video

During the presentation, I asked him about live demo-ing. Apparently this is a Van Wijk’s thing too… and Stef mentioned this analogy… say, you built a bridge. If you refuse to cross the bridge, no one else will cross the bridge either. Although it is scary and something goes wrong at live demo, but we should strive to give a live demo… I was discussing how he started this project. He said he had an idea about this, so he simulated /created a dataset and then built a system to demonstrate his idea works. I thought it was interesting to hear this project was technique-driven. He also shared his Ph.D. dissertation on twitter. If you do dynamic networks, this is a must read.

Instead of going day by day, I changed my mind to focus on some key themes I encountered during the conference. The first one is abstraction. The work by Stef is one example of abstraction. Time Curves presented by Bach et al. is another example of abstraction. Time curves are like a scatter plot, and each point is a projection of a multidimensional data sets. Then each point is connected and colored based on its temporal information. It was very well presented and examples presented were quite compelling. However, it seems that the efficacy of the method boils down to coming up with the best distance measure to summarize each data point. 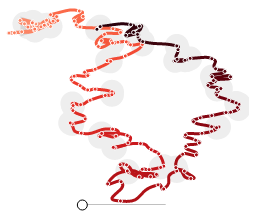 There was a few paper on PCP. They introduced a new interaction technique to select bundles and a novel vis encoding techniques to combine scatter plots and PCP.

The video demonstrates the basics of the interaction. This selection method also resonated with an interaction design presented by Roeland Scheepens. Roeland presented a paper called, “Visualization, Selection, and Analysis of Traffic Flows” on Wed. The system had very nice particle visualization and the interaction design to sample and selected certain traffic flows to analyze. Although the video does not show the interaction method for selecting the flows of the specific direction, it was similar to Dumas’s method. Traffic Flows also had a very nice transition between two 2D views with 3D transition, switching from XY coordinates to XZ or YZ coordinates, for example, to select routes at a certain altitude.

There was a few paper on evaluation of PCP, but I am not sold on them… But this paper by Johansson and Forsell is a good review of the previous study on PCP.

This paper was presented by Renata Raidou, and it was quite interesting. Video and Paper. It takes awhile to get your head around how a dot corresponds to a dot on the line, but the enhancement do reveal some hidden patterns that are apparent in the scatterplot. It is a novel effort to combine / embed scatterplot into PCP, but I wonder if it would be better to have both and have them linked. They also introduce the selection method using the enhancement. 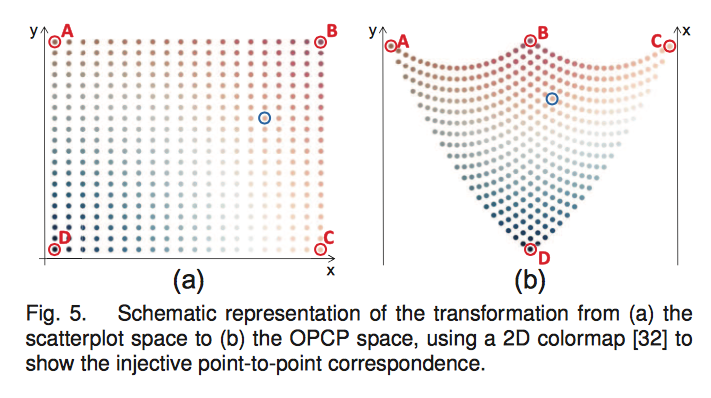 This design study on visualizing the sonic topology of poems was very interesting, presented by McCurdy from Miriah Meyer group. The tool is called Poemage and built in Processing. The tool supports close reading (the careful, in-depth analysis of a single text to extract, engage and even generate as much productive meaning as possible) rather than distant reading (collecting and analyzing huge amounts of textual data for synoptic evaluation). It was interesting to hear that insights that scholars get from the visualization are almost always “correct” in the sense that it is subjective and up to the reader. In that sense, there is no “false positive” and any insights are “effective”. The resulting visualization is very expressive and organic. 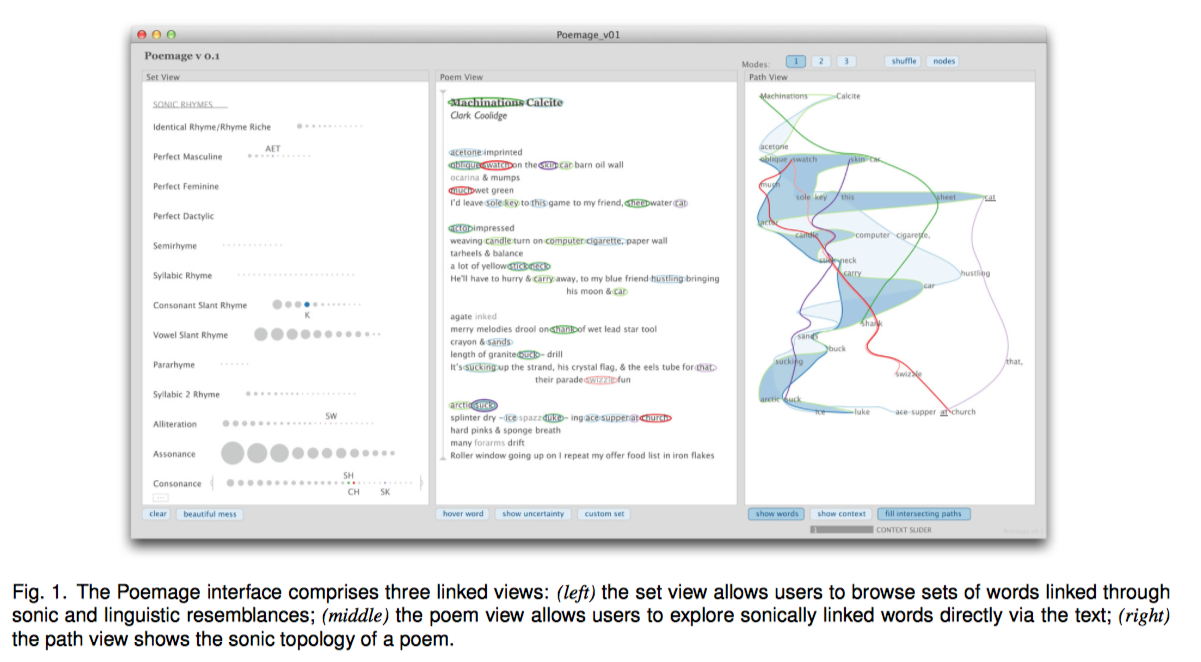